A few decades ago, in the dead of the night following the day of the Great Guano Dust Storm, while Joetown lay slumbering and its one-man police force lay under a three-legged barstool drunk as a stoat, Comrade Joe the First’s ambitious, Citadel-educated nephew, Sgt. Joseph Chan Fourneux Jones, led eight other soldiers in a coup that peacefully toppled his uncle’s government (these nine soldiers comprised the island’s armed forces — air, land, and sea).

Perhaps “topple” is not the appropriate word. No, Comrade Joe the First’s nephew and his comrades merely applied a boot or three to a door that had long been suffering from dry-rot and moral turpitude. At least that’s what people said to his face. What they said behind his back did not matter and they did not much care about the change in leadership — at least the town’s name wouldn’t change again.

“Go ahead, Al. But I still don’t see why we have to invade Spain.”

In any case, while Ronald Reagan was keeping Miami and Mobile safe from marauding Grenadans, Poco Cabesa woke up one morning and found itself with a new President-for-Life. Actually, some people did not learn about it until late in the afternoon because they were sleeping off the previous day’s celebration of Dean Martin’s birthday.

As  stated, the previous President-for-Life, Comrade Joe the First, prudently disappeared into the coastal highlands of Medillo Grande along with his French wife (the reputed and much feared provider of said turpitude), there to become the island’s most celebrated recluse.

Subsisting on fish, jungle plants, and a feral cat whenever Fate sent one their way, like Napoleon on Elba or Nixon in San Clemente, Joe the First found plenty of things to occupy his time — collecting beach flotsam under cover of darkness, hunting palm crabs, avoiding his seething spouse. According to those still in contact with him, Joe never thought retirement could be this good.

“Hostages? I thought he was trading arms for sausages.”

Perhaps some of his pleasure can be attributed to Joe the First’s decision to take the liberty of vacating the premises with what there was of Poco Cabesa’s tiny treasury. This caused numerous problems for his nephew, including eight disgruntled “revolutionaries” who were hoping they’d finally get paid. Undeterred, Joe the Only set about doing what his uncle could not: Reinventing Poco Cabesa (with apologies to Al Gore).

Among each generation of island residents there have been those optimists who ignore the heat, the dust, and the smell and continue the struggle to improve their island home. History has also shown that those who can usually leave by whatever means available.

But some citizens had high hopes. Their new leader was an educated man who had seen the world (well, at least Charleston, South Carolina) and he even had an undergraduate degree in accounting. Maybe this time things would be different.

Comrade Joe the Only is a pleasant, cultured, handsome man schooled at the Citadel in Charleston, South Carolina, and the Commandant of the military junta running the island (it is a very small junta). Like many island residents, his heritage is Anglo-Hispanic-African-Chinese-Hawaiian-Portuguese-Congolese, with a few other genetic codes sprinkled here and there.

Based upon his stated plans, the newest President-for-Life’s plan was to transform his homeland into a thriving banking haven modeled on the Cayman Islands and a peaceful nation of industrious, respectful and docile citizens modeled on Singapore. He called his approach “compassionate Caribbean capitalism.”

Comrade Joe the Only professed to idolize Lee Kuan Yew (the man who made Singapore what it is today) and stated that his intention was to turn Poco Cabesa into a resort destination and off-shore banking haven for international corporations seeking to reduce their tax burdens. At the very least, he hoped to transform the island into a tourist destination for those seeking the thrill of sports activities unavailable elsewhere due to high insurance costs.

Comrade Joe the Only believed that a parliamentary dictatorship guided by laissez faire supply-side economics was the key to stable, consistent growth and social order. Unfortunately, this belief required the aggregation of the island’s meager total monthly stipend into a lump sum for collateral, providing the seed-money necessary for Comrade Joe the Only’s ambitions, and no one receiving Trust funds wants to share. Confounded by his miffed uncle’s  liberation of the island’s treasury, his current economic realities include late payments to BP Amoco for fuel for the island’s generator and soldiers who thought revolution meant finally getting paid.

Comrade Joe the Only does control the disbursement of monies from the Hyman Trust and, although the people are guaranteed the dole, a little supplication to the boss is always necessary in order to receive your full allotment. But, try as he might, he has been unsuccessful at getting his countrymen to pool their money and put it toward a common goal.

Joe the Only’s banker in custody at Miami International Airport.

But, just as he seized the opportunity to depose his uncle, he has always had an eye out for any business opportunity. As an example, he owns and operates various businesses and services, including the cable TV system, which runs off of Comrade Joe the Only’s satellite dish (the picture is excellent, but you better be ready to watch what Joe the Only wants to watch).

Comrade Joe the Only, enlightened capitalist though he might be, is also a product of his culture. Any business showing a profit draws Comrade Joe and his boys like picnics draw ants.

Despite his education, Joe carries the genetic code of the risk-takers, freebooters, buccaneers, and marine supplies salesmen who made Poco Cabesa what it is today. Try as he might, sometimes his pirate nature gets in the way of his entrepreneurial spirit.

The Do Me Quartet (Dewdrop, far right)

At various times, Comrade Joe the Only’s uncle (Comrade Joe the First) claimed that he could trace his heritage to ancestors as diverse as Hyman Klinkle, an ancient African Aksum king named Malik Malik, and a quarter-Cherokee singer-barmaid named Dewdrop. But it is clear that Hyman was a circumspect, devoutly religious man, who bored his own long-suffering wife to tears for nearly forty years, nobody in ancient Aksum ever heard of a Malik Malik, and all that was worth remembering about Dewdrop was lost long ago on some repainted men’s room wall.

But, despite these disappointments, no one on the island held these reality misdemeanors against Comrade Joe the First (except, perhaps, Comrade Joe the Only). Making up your past was (and remains today) as common on Poco Cabesa as tattoos on a professional basketball player. To the long-suffering residents, once again the best laid plans of optimistic individuals had come to grief upon the aromatic shoals of their island home.

In recent years, Comrade Joe the Only has established an uneasy alliance with another island native, Baby Willie Yu. Born during the Great Guano Dust Storm of 1954, which lasted for forty days and forty nights (leading to the island’s only real tourism boom when evangelicals flocked to Poco Cabesa to await the “End of Days”), Baby William Jefferson Alvarez Wu seemed destined for great things.

His father (whose own father acquired what passed for a fortune on Poco Cabesa by speculating in bean curd imports and then rum-running during Prohibition) owned two of the six taverns licensed to operate in (then) Klinkleburg. His mother (who lavished attention on her only son and gave him his nom de plume) kept the family books.

Baby Willie as a schoolboy giving national salute, circa 1962.

Because of his parents’ exalted social and economic status, Baby Willie’s boyhood was, by Poco Cabesa standards, quite privileged. Unlike his peers, whose families survived on funds from the tightfisted Limited Trust, Baby Willie benefited from having parents who actually earned a living. Schooled at home by a string of pious tutors, Baby Willie also took lessons from his saloonkeeper father in the big classroom of life.

After Comrade Joe the First’s unusual ascent to power in the early 1960’s, Poco Cabesa (except, of course, for Medillo Grande) was quite similar to Florence, Italy, during the time of the Medici family (but without the great art and culture). Kingpins obtained and retained their economic, political, and social clout by whatever means necessary. Turf-wars settled with scathing insults and big sticks were a monthly occurrence. Hustles and cons were as common as lobbyists in the foyer of your state capitol.

Those lucky enough to have connections to the rest of the world profited most, because those limited to island resources only had access to an extremely tight currency supply that made borrowing and lending a fairly static affair. Only funds brought in from outside could change the status quo, and the lucky “jet-set” few (like the Wus) had no reasons to invest in this decidedly unpleasant island. Excluding Medillo Grande, there was nothing to attract anything but flies to Poco Cabesa. 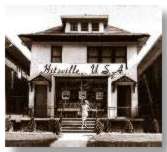 Baby Willie promoted groups to Motown in the 1970’s but failed to foresee the Disco craze.

Through the Swinging Seventies, Egregious Eighties, and dotCom Nineties, Baby Willie used his smarts and his family position to carve out a niche for himself atop the island’s demi monde. Resisting entreaties from expatriate family members to join them in Virginia Beach or Houston, in many ways this dapper, chubby fellow is Poco Cabesa’s version of Sydney Greenstreet.

Not exactly what festival-goers had in mind.

Inspired by events like OktoberFest, Burning Man, Mardi Gras, and the Beijing Olympics, Comrade Joe the Only and Baby Willie staged a “PirateFest” to attract tourists. The first night drew some of the biggest names in entertainment (well, Charo and Gene Simmons showed up), but a methane explosion in Cesspool #13 dampened the evening’s gaiety.

That (combined with the surplus tents pitched in the rocks and billed as “beach bungalows”) led to the rapid exodus of the few curiosity-seekers who stopped in to see the “pirates.” Despite Baby Willie’s best efforts, including importing Cubans to pack the audience, the whole production closed early amid accusations of financial improprieties and misplaced payrolls.