Poco Cabesa has a rich and varied history typified by bursts of frenetic energy that free-fall into total languor. It is hot, it is dusty, and it is hard to believe anyone would want to live there (except in tropical Medillo Grande). Therefore, following the end of the guano boom, the island became the backwater that all other potential backwaters looked to as the prime example of what they did not wish to become.

Importing mutton from Cuba during the famine of 1923

Poverty was so widespread that anyone with a matching pair of socks was considered well-to-do. If you were fortunate enough to have a roof over your head (notwithstanding the lack of walls, plumbing, furnishings, etc.), then you were among the elite.

But around the time that the United States and the USSR were nose-to-nose over that little slice of heaven known as Cuba, an earth-shattering event occurred on the island… Something changed.

Virgil was basically a happy fellow, but hard times made him hard.

To understand this change, it is necessary to consider the life of the future Comrade Joe the First (given name, Joseph Obologo Feinman Forneaux), the progeny of a barmaid originally from French Guiana by way of Savannah, Georgia, named DeeDee and a marine supplies salesman from Natchez, Mississippi, named Virgil whose last name has been lost to history.

Virgil passed through Poco Cabesa during the Great Depression, looked around, and stayed just long enough to expand its gene pool and leave behind a few brochures. Despite the island’s isolation, things like this did happen occasionally. Although only of interest to Virgil, two years later he fell asleep at the wheel of a “borrowed” Chevrolet coupe outside Clearwater, Florida, and drove into a canal and drowned. What is important about all this is the fact that Virgil and DeeDee’s son, Joe, grew up and did… well, something. If a bit involuntarily.

Like his peers, Joe Forneaux came of age during the waning days of the post-guano aristocracy — referred to by those who were interested as “The Days of Torpor.” It can be said with certainty that Comrade Joe the First never held a real job (there being no jobs to hold) and so from birth he primarily lived off his meager monthly stipend from the Trust.

Little Joe had to work hard to get by.

However, Joe was ambitious and made many attempts to start businesses on the island. As a boy, he had the first shoe-shine stand on the island. Sadly, not only were the island’s residents too poor to afford shoe shines, most didn’t even have shoes.

Another venture was what Joe called a “preemptive guano catcher,” but it too was doomed to failure. Beaten down by what he saw as a cruel fate, the future Joe the First became the ringleader of an informal band of malcontents called the “Poco Rats” who believed that the aristocracy was hoarding the Trust.

This ragtag band spent its days and nights sleeping, singing, drinking, and borrowing against next month’s Trust check. (In 1939, Hyman’s beneficence had been expanded by the trustees of the Poco Cabesa Limited trust to include more Poco Cabesans after a three day temperance strike by the island’s sole purveyor of hard spirits, Sing Ree Smith.)

Honus Ombolo MacDuff doing his “house of cards” bit for Joe and the “Poco Rats.”

Although Joe and his mates were inspired by the socialist revolutionary tides sweeping the world in the 1950’s, insofar as taking action went, it was really just a topic of conversation to while-away the hours between Trust checks.

It was Joe’s mighty thirst and lustrous baritone tremolo that earned him the nickname, El Negro Dino, and his sparkling gray eyes caused many a young female to swoon. But Joe’s life changed forever one rainy night in 1961 when his extemporaneous one-man staging of “Oklahoma” accidentally led him into the home of the island’s Prime Minister  looking for shelter from the storm (or anything not nailed down). After the terrified and chinless P.M. turned on the kitchen light, drunken Joe mistook it for a spotlight and began his legendary falsetto version of “I Cain’t Say No.”

When Joe sobered up enough to respond to stimulation of his gray-matter, he started thinking. First, Joe’s entire family went on the public payroll, displacing most of Klinkleburg’s remaining elite, who took flight for Boca Raton, Florida, the Leeward Islands or Minnesota. Seeing that the coast was clear, Joe took control of distributing the Trust and assumed the title, “Comrade Joe the First, President-for-Life.” Fortunately for Joe, the Cuban Missile Crisis had the world ducking and covering like the gallery at a Gerald R. Ford Pro-Am golf tournament.

Newly empowered, Joe looked around for something else to do and decided to rename Klinkleburg. Joetown suited him better, he said. “And it rolls so easily off the tongue, yes?” There was a bit of grumbling, mostly from the saloon owners who would have to change their signs, but it was generally agreed that the new name was much easier to spell than the old one and, all things considered, not really worth arguing about.

Like most Poco Cabesans at that time, Joe had a severe misunderstanding of the Poco Cabesa Limited Trust. The island’s Have-nots had always assumed that the Haves were keeping the gravy for themselves, and the Haves did not concern themselves with what the Have-nots thought or did as long as they stayed in their own neighborhood.

When Comrade Joe discovered that everyone received the same amount of cash every month it put him into a deep funk. This soon extended to the entire populace after Joe and his kin drank up all the rum on the island, leading to what became known as “The Great Hangover.”

Encouraged by his new French wife, who came to Poco Cabesa by way of the first Club Med (records there indicate that she was fired for pilfering), the new leader reluctantly set to work enticing anyone with two nickels to rub together to come rub them on Poco Cabesa. Unfortunately, while the names Papa Doc and Baby Doc inspired imaginative bootlicking by multinationals seeking cheap labor, the name Comrade Joe the First elicited impolite if not mocking laughter in corporate hallways throughout the hemisphere.

Joe the First did sign a trade agreement with Castro, but all Joe got out of the deal before Fidel stopped accepting his collect calls were a few cinder-block bunkers that are now Joetown’s leading grog shops, the previously mentioned Romanian de-salination plant, and an armor-plated 1937 Chrysler with a bad transmission.

Desperate to make good on his many promises (remember, Joe just can’t say no), he cut a deal with Haiti to act as a subcontractor in its baseball manufacturing business. Alas, the number of Poco Cabesans interested in stitching baseballs was quite small (on top of that, those who were interested were not very good with their hands). Therefore, after the perfunctory staging of various poorly attended revolutionary events at the outset of Comrade Joe the First’s regime, the people of Poco Cabesa lapsed back into their tropical slumbers on their island in the sea.

Despite efforts to attract tourists and investors, there was not much reason to come to or stay on an island where 90% of it looks like the moon and smells like the bottom of a bird-cage. So, again, despite Comrade Joe’s efforts, the island disappeared from the world stage and Comrade Joe was eventually deposed.

Currently, Comrade Joe the First remains an aged fugitive, hiding out in the jungle coastline of Medillo Grande with his unhappy wife. At the risk of digressing, it is now appropriate that time be taken to delve into the past of Comrade Joe the First’s Wife (whose real name is unknown, although several aliases have been uncovered).

According to documents and journals uncovered in her safe deposit box at the Ruptured Parrot Saloon after she and her husband decamped for the jungle, Comrade Joe the First’s Wife — or Comrade Joe the Only’s step-aunt, if you prefer — was born in southern France during World War II just after that illustrious nation’s third military catastrophe within 75 years. Her father was a petty local bureaucrat with the Vichy government; a paper-pusher, as her own scathing journals note. Despite his pitiful protests, Papa was hung as a Nazi collaborator not long after the French found someone else to surrender to in late 1944.

Their world turned upside down, Comrade Joe the First’s Wife (CJFW for brevity’s sake) and her apparently half-witted mother, Giselle, fled to Casablanca due to mama’s belief that Humphrey Bogart lived there. Despite her disappointment when she was disabused of this notion, mama quickly took up with a saloonkeeper named Phil, whose bar, “Phil’s Casino de Casablanca,” was popular with ex-pat Germans, embittered Italians, and non-observant Muslims.

According to her journal entry of April 1, 1958, when Comrade Joe the First’s future wife became ripe enough for her step-papa to eye with non-parental affection, mama unceremoniously shipped her off to live with relatives in Haiti. Police records there suggest that these relatives were the owner-operators of a brothel and Chinese laundry. There, she spent her time washing sheets and avoiding being trapped between them. It is not too great a presumption to assume that this unhappy upbringing did little to give CJFW a positive outlook on life.

At the age of seventeen, fed up with her lot in life, this determined young lady emptied her relatives’ cash-box, hitched a ride on a raft of inner-tubes headed anywhere, and wound up in Martinique, where she talked her way into a housekeeping job with the infant Club Med organization. She rose quickly through the ranks until an internal audit revealed significant variances between her accounting practices and the Club’s.

Jumping the first boat out, she wound up broke and stranded in Joetown a few days after Comrade Joe the First’s ascent to power. This lithe little lady immediately attracted the new leader’s eye by beating the bejezus out of his befuddled bodyguards and enflamed his affections with her own unique interpretation of the “Australian crawl.”

Alas, “post-coup,” Comrade Joe the First’s unhappy wife spends her days shooting palm crabs with a target pistol and plotting her husband’s return to power. As was widely reported at the time, her last known public words were: “Mark’a my words. Some day, we be back on top!” 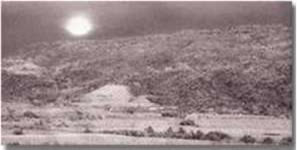 “Through the guano haze
Soars high the silver orb.
Shall Dame Moon guide my nostrils
To good fortune?”
Final lines of “Through the Guano Haze,”
by Gerald Fitz-Said, (1893)
Poco Cabesa’s first and only poet laureate.